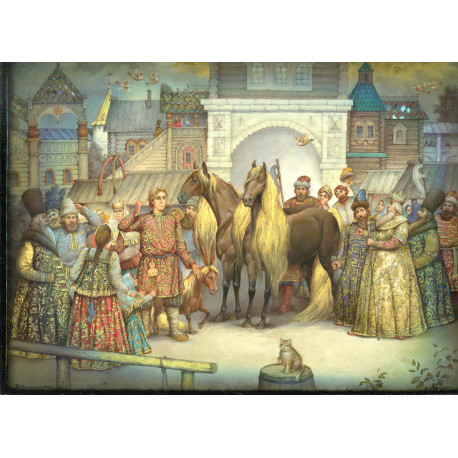 Tale of a Hump-backed Horse

This exquisite box was painted by well-known Fedosknio artist Shavirin Boris. The subject of this box is the scene from the popular fairy-tale "The Humpbacked Little Pony".

This tale tells about adventures of the stableman Ivan and his faithful friend the Humpbacked Little Pony who is a magical creature. In the beggining of the story, Ivan has catch the horse that trampled down the wheat field of his father. The horse asks Ivan to release him, and promises to give Ivan two golden-maned steeds of unheard-of beauty and a pony with two humps on its back and yard-long ears. This interesting moment we can see here on athe box!
The golden-maned steeds help Ivan to become the tsar's stableman, while the Little Humpbacked Pony becomes his faithful friend. The capricious and self-willed tsar obliges Ivan to carry out very difficult tasks: to catch the firebird, to kidnap the beautiful Tsar Maiden, and to get the Tsar Maiden's ring lost somewhere on the bottom of the ocean. While fulfilling these errands Ivan travels to the Moon's crystal palace to find the reason of the Huge Whale's torture. His back is covered with forests, meadows and villages, and he can't get free. The Moon tells Ivan that the Whale is punished because he has swallowed three dozen ships. Afterwards the Whale lets the ships go, receiving his freedom, and helps Ivan to find the Tsar Maiden's ring.
The Tsar-Maiden has ordered the old tsar to dip himself into three cauldrons of boiling water, boiling milk and ice cold water in order to regain his youth. But the coward tsar, in his turn, orders Ivan to be the first to jump into the boiling water. Having undergone this severe trial, Ivan emerges from the last cauldron as an extremely handsome young man, whereas the old tsar, who also decides to test the magic, is boiled alive. All people of the kingdom welcome Ivan, and ask him to become their tsar. The final episode of the tale is the marriage of Ivan and the beautiful Tsar Maiden.
A broad spectrum of colors is used to create this highly detailed world. The artist demonstrates his unsurpassed skill while painting the character's festive attire. Painting with an ultra fine brush, he creates exquisite gold lace texture of the dresses. The effect of festivity is strengthened by several pieces of mother-of-pearl of different colors are inlaid into the painting. They are in the roofs of the palace and in the costumes of the Tsar and ladies on the foreground.
The scene is framed with a gold pattern; the box's sides are decorated with rich flower pattern as well.
The box is constructed from paper-mache. Black lacquer is used to paint the exterior of the box while red lacquer completes the interior of the work. A hinge is fastened to the top of the composition, and the box rests on four legs. The work is signed with the artist's name, Fedoskino and 2020.