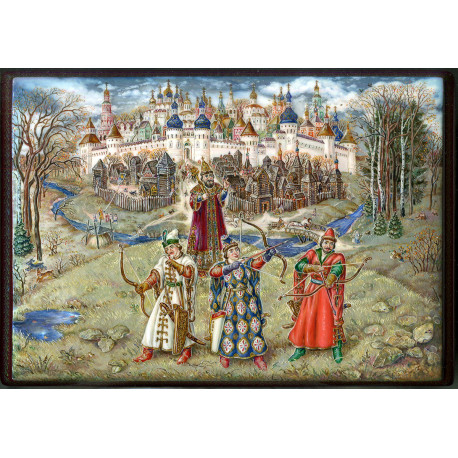 This large marvelous casket is showing different scenes from the "Princess Frog" fairytale.
The casket has the painting on the lid and on all four sides!

The past, present and future are all represented through the artist's vision. The character placement allows for more than one element of time to exist on the same surface. As father told, young Tsarevich Ivan has traveled deep into the woods to retrieve his arrow. A bride was supposed to be the grand reward. Ivan's present condition appears lost. But, the flurry of characters scattered about the composition might have something to say about the conclusion of this adventure? Baba-Yaga hovers among the tree tops on her mortar, smirking in mid-cackle because of the animalistic frenzy. Eventually, it will take the bear, the drake and the chicken-legged hut to aid in the success of Ivan. The amphibian presentation before him is definitely more than meets the eye. Many of the animals depicted here frequent the end of the story itself. Within the final pages of the "Princess Frog", we find an assembly of animals that will help Tsarevich Ivan rescue the beautiful Vasilisa from the clutches of Koshchei the Deathless. And to think it all began with the simple flight of an even simpler arrow?
The box is constructed from paper-mache and made in the village of Fedoskino. Mixture of red lacquer with aluminum powder is used to paint the exterior of the box while red lacquer completes the interior of the work. The box rests on four feet.
Oil-based paint is the primary medium used to paint this massive assortment of detailed elegance. There are multiple dimensions within the scene because of the skilled layering accomplished by Otryaskin. The depth is delightful. Trees appear to bob and weave within one another. Branches, leaves, grass and bark appear as realistic as can be. This is especially noticeable in the, well, the everywhere! The branches of the trees holding Baba-Yaga are consistently layered and smudged to achieve the three-dimensional nature of them. The yellow and orange tones used here are electric. Electric because of the considerable amounts of gold leaf that the leaves were painted upon.
Each character is exceptionally animated. Clothing and facial features that appear as sublime extensions of the artist's brush. The realism here is astounding. The clothing of Tsarevich Ivan and the facial features of Baba-Yaga are primarily noteworthy. Otryaskin has also used additions of mother-of-pearl to intensify his presentation in key areas. Baba-Yaga glows in the autumn sun. The hat and sheath of arrows worn and carried by Ivan shimmer like polished gem stones. The entire pond that he stands in is an inlay itself!
There are no lines where the inlays were cut and applied. A real tribute to the artist's skill!
The box is signed by the artist on the back side of the box.
Few words about the Artist : Otryaskin Alexey Konstantinovich was born in 1969 in the town of Dmitrov, Moscow Region, where he resides at present. In 1991 the artist finished the Fedoskino Art School. His teachers were D.V. Rogatov and Yu. Mikhalyov. Now the artist is a freelance. His favorite themes to depict are fairy-tales and Russian architecture.