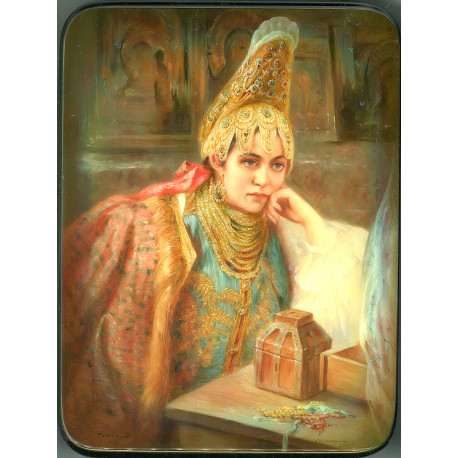 This portrait painted by talented and well-known Golubeonkov Sergey from the village of Fedoskino is an interpretation of a canvas-on-oil painting "Boyarynya" by Konstantin Egorovich Makovskiy (1839-1915).

Konstantine Makovsky is a Russian painter, a representative of academic romanticism. Was born in the family of Egor Makovsky, an accountant and an amateur painter. Studied at the Moscow School of Painting, Sculpture and Architecture (1851-1858) under Sergey Zaryanko. The formation of artist's personality and creative works were much influenced by the acquaintance with Vasiliy Tropinin. In 1958 he entered Petersburg Academy of Arts. In 1963 he took part in the "Riot of fourteens", left the Academy, and became one of the founder members of "Itinerants Comradeship" (1870). Since 1833 began to expose his personal works. In his creation, the artist kept to romanticism concept. Russian history plots and vital issues of people's life usually became the themes of his life depiction. Best known as a painter of Russian folk scenes, especially of rural peasant life ("Boyarynya Bearing a Tray", "Children Running from the Storm", "By the Stove", etc.). His works are kept at the Tretyakov State Gallery, the State Russian Museum and many other regional museums.
The portrait is highly detailed and very accurate.Sergey Golubeonkov painted with a great care each minor element of the boyarynay's rich attire including shining pearl beads of her necklace, precious stones of her pendant gold ear-rings, golden embroidery on her blue atlas sarafan, fine lace that decorates sleeves of her white shirt, fringe that border her golden jacket, and certainly pearls and golden embroidery that adorn her luxuriant kokoshnik. Richness of material and brilliance of precious stones is achieved by gold metal leaf and silver metal leaf inlaid under oils. The background is filled with obscurely painted Russian icons.
The portrait is framed with a gold line. The sides of the box are decorated with two gold lines.
The box is constructed from paper-mache. Black lacquer was used to paint the exterior of the piece while red lacquer completes its interior. The box has a hinge from the left of the composition and rests on a flat bottom. Signed with the artist's name and the village of Fedoskino.