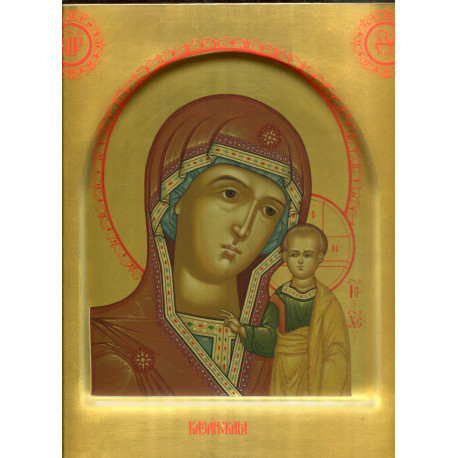 Our Lady of Kazan

This Icon has been painted by Natalie Lukina of Palekh.

Our Lady of Kazan, also called Theotokos of Kazan, is a holy icon of the highest stature within the Russian Orthodox Church, representing the Virgin Mary as the protector and patron of the city of Kazan. The image is also venerated in the Catholic Church. It has been considered a palladium of Russia for centuries. Two major Kazan Cathedrals, in Moscow and in St Petersburg, are consecrated to Our Lady of Kazan, as are numerous churches throughout the land. Her feast days are July 21 and November 4, (which is also the Day of National Unity).
The original icon has been stolen and never recovered. Ancient and venerated copies have been displayed at the Kazan Cathedral of Moscow, at Yaroslavl, and at St. Petersburg.
Some History.
The icon was discovered on July 8, 1579, underground in the city of Kazan by a little girl, Matrona. According to tradition the location of the image was revealed to her by the Theotokos, the Blessed Virgin Mary, in a Marian apparition. The original icon was kept in the Theotokos Monastery of Kazan built to commemorate the spot where it had been discovered. Other churches were built in honour of the revelation of the Virgin of Kazan and copies of the image displayed at the Kazan Cathedral of Moscow, at Yaroslavl, and at St. Petersburg.
Kazan Monastery of the Theotokos where the icon was conserved until 1904. Invocation of the Virgin Mary through the icon was credited by the Russian commanders, Dmitry Pozharsky and Mikhail Kutuzov, with helping the country to repel the Polish invasion of 1612, the Swedish invasion of 1709, and Napoleon's invasion of 1812.
In the night on June 29, 1904 the icon was stolen from the church in Kazan where it had been kept for centuries (illustrated, to the left). Thieves apparently coveted the icon's golden setting, which was ornamented with many jewels of highest value. When several years later Russian police finally apprehended the thieves and recovered the precious setting, they declared that the icon itself had been cut to pieces and burnt. The Orthodox church interpreted the disappearance of the icon as a sign of tragedies that would plague Russia after the image of the Holy Protectress of Russia had been lost. After the Russian Revolution of 1917, there were plenty of theories speculating that the original icon was in fact preserved in St. Petersburg. Reportedly, an icon of Our Lady of Kazan was used in processions around Leningrad fortifications during the Siege of Leningrad[1]. A conflicting theory was that the image had been sold by the Bolsheviks abroad. Although such theories were not credited by the Russian Orthodox church, a reputed original, (one of several in existence) was acquired by the Blue Army of Our Lady of Fatima and enshrined in Fátima, Portugal in the 1970s. The image proved to be a copy, dated by experts to ca. 1730.
In 1993, the icon from Fátima was given to Pope John Paul II, who took it to the Vatican and had it installed in his study, where it was venerated by him for eleven years. In his own words, "...it has found a home with me and has accompanied my daily service to the Church with its motherly gaze."[2] John Paul II wished to visit Moscow or Kazan in order to return the icon to the Russian Orthodox Church. When these efforts were blocked by the Moscow Patriarchate, the icon was presented to the Russian Church unconditionally in August 2004. On August 26, 2004 it was exhibited for veneration on the altar of St. Peter's Basilica and then delivered to Moscow. On the next feast day of the holy icon, July 21, 2005, Patriarch Alexius II and Mintimer Shaymiev, the President of Tatarstan, placed it in the Annunciation Cathedral of the Kazan Kremlin .

15 other products in the same category: