> Russian lacquer boxes>KHOLUI>Tale of a Magic Fish or By the Pike's Will
Sale! 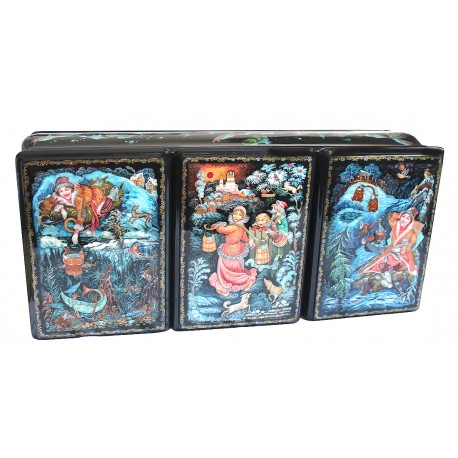 Tale of a Magic Fish or By the Pike's Will

This very large box shows several key episodes from the popular Russian fairy-tale "By the Pike's Will" or "Emelya and the Magic Pike".

The box is consist of three large compartments that opens from the top and one drawer on the front side. In short, this tale is about a young man who finds a special fish when he goes to get water from the river. In return for releasing her, the Magic Pike offers to fulfill Emelia's wishes. Being a lazy fellow, Emelya light-heartedly uses magic forces, asking the pike to help him to perform his chores while he relaxes. He orders his water-pails to go home by itself, which they do, much to the surprise of his sisters-in-law. Then he orders the sledge to go by itself to the nearest forest where his ax falls wood for the fire. Afterwards he gets to the tsar's palace, riding a stove. In the palace he meets the tsar's daughter and falls in love with her. The tale ends happily and finally Emelya marries the tsar's daughter. The scenes depicted on the box shows key episodes from this tale: Emelya catches Magic Pike, than he sister-in-law tells him that he is lazy and she has to go out for the water and the third shows, how the ax is cutting the wood chops without him and buckets full of water going to home without him too("by the pike's will!"). The box was painted by Kapralova Galina, a prominent artist in Kholui.Egg-tempera paint is the main medium used to paint this composition. The palette is based in blues and reds that make complementary combinations throughout the scene. Gold and silver are used to highlight and detail of the composition, but its sparkle naturally enhances the great depth and epic mood set by the theme! The box is made out of paper-mache and pressed paper. The interior of the box is red, while the exterior is covered with back lacquer. The three lids are hinged, and the box rests on four legs. Golden ornaments frames the compositions, while the painting of the pine-tree branches wraps around the sides of the box. The box has a hinge above the three parts of the lids and rests on four legs. Upon completing the work on this piece the artist writes the title "By the Pike's Will", Kholui, and signs her name at the bottom of the middle lid.