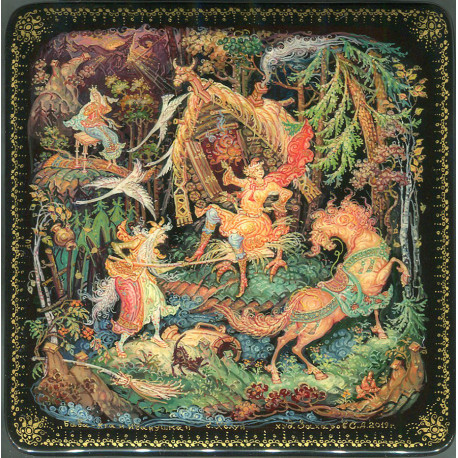 The box shows an episode from the fairy-tale "Vasilisa the Beautiful" and includes Baba Yaga, Ivan and his horse in front of Baba Yaga's hut on Chicken legs.
Shortly the plot of the story is following:
One merchant has only one daughter, and when her mother was dying she asked dauther to come to her and give her a doll. She said when you will be in trouble, just feed the doll and it'll help. Suddenly she died and later on merchant has married another woman with two daughter. The girl's cruel stepmother sending her to the forest to ask Baba-Yaga to give her work. It is the stepmother's pretext, in fact she wants Baba-Yaga to kill the girl. In the forest Vasilisa meets Baba-Yaga and three riders: the Red Sun Rider, the Dark Night Rider, and the Bright Day Rider.But, finally, this tale has a happy end. The handsome Prince offers the girl his hand and heart and invited her in his marvelous palace.
In addition to the front composition and major characters we can see helpers of Baba Yaga- Geese and Swans, Vasilisa sit on the bench and one of the riders in the left upper corner.
The scene is painted in yellow, green and red tempra paints, the trees, figures of people are headlined with gold and aluminum paints.
Black lacquer cover the box's exterior and red lacquer covered the interior. The painting is bordered with an ornament painted in gold paints, and the box's sides are decorated with rich gold decoration.
The box is constructed from paper-mache. The lid is hinged to the top of the scene, and the box rests on four small round legs.
The artist wrote his name, 2019, the title and the village name of Kholui at the bottom of the composition in gold paint. The artist does the same on the interior of the lid, but added that this work is his own original creation and left a more decorative signature.