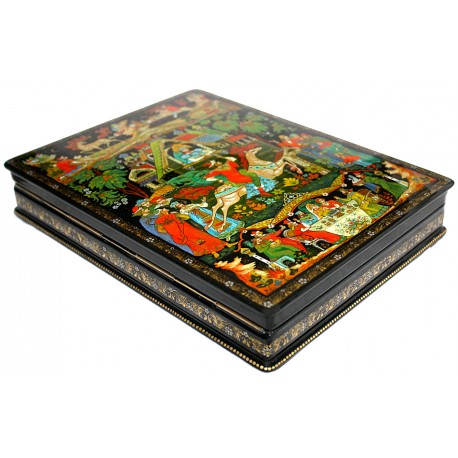 Talented Palekh artist Tsyganova Olga is a creator of this large original composition. Tsyganova is a well-known artist whose style is enhanced by the ultra-thin brushwork she manages to render.

Talented Palekh artist Tsyganova Olga is a creator of this large original composition. Tsyganova is a well-known artist whose style is enhanced by the ultra-thin brushwork she manages to render.
The box shows important episodes from the Russian folk fairy-tale "Sivka-Burka". It tells about the adventures of the youngest of three brothers, Ivan the Simpleton. For his courage and easy temper, his father presented him the magic horse, Sivka-Burka that was ready to serve Ivan. With the help of Sivka-Burka's magic powers, Ivan managed to jump to the highest tower in the king's palace, where the king's daughter was standing, and take the ring she was holding. This made him the victor in a contest, and for performing this feat he was allowed to marry the tsar's daughter.
On the top of the composition we can see the begginning of the story. In the center Sivka-Burka with Ivan sitting on his back, giving a magnificent leap, high up into the air. The magic horse reaches the balcony where the princess stands and Ivan has time to take her ring and even to kiss her. The tsar and all people of the kingdom open their mouths with amazement. Ivan is a winner, and now the princess must marry him.And in the bottom of the composition we can see a merry feast.
The composition is painted in the traditional Palekh style. Gold paint is used to enhance the already intricate detailing and bring out the true power of the palette. Here the artist has managed to find place for several human figures, complex medieval architecture and detailed landscape that proves his talent of a skilled lacquer miniature painter!
Gold complex ornamental work with silver flowers is framed the lid's artistry. The box sides are decorated with intricate gold and silver floral ornamentation.
The box is made out of paper-mache. Black lacquer covers the exterior and red lacquer covers the interior of the box. A hinge has been fastened to the left of the composition, and the box rests on four round legs. The box is signed with a name of the village(Palekh), 2014 and the artist name at the bottom of the composition.