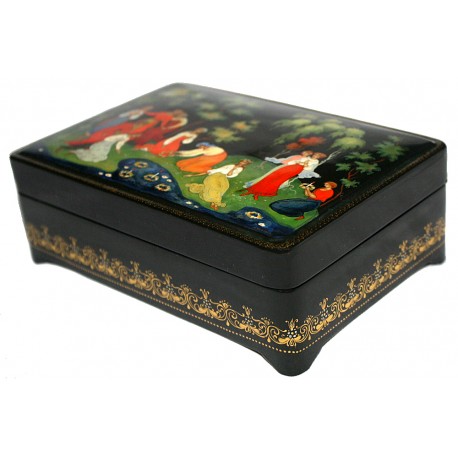 Talented artist Arapova Anastasia of Palekh painted this wonderfully creative scene. It shows how the Russians celebrate an ancient pagan feast, which is called the Ivan Kupala Day.

Talented artist Arapova Anastasia of Palekh painted this wonderfully creative scene. It shows how the Russians celebrate an ancient pagan feast, which is called the Ivan Kupala Day.
This feast coincides with the St. John Baptist's Day in people's thinking because of the fact that the basis of both these feasts is ablution. That is why the Russians started naming their ancient pagan feast as the St. John Baptist's day, keeping its all pagan customs and beliefs. The feast of Ivan Kupala Day is celebrated on the 7th of June, in the period of summer solstice. Kupalo is the pagan God of Fertility. In ancient times, during the feast of Ivan Kupala, the Russians made a sacrifice to this God by throwing herbs into the bonfire. May be because of this ancient custom people often jumped over the bonfire during this feast. Another common ritual of this feast is ablution. It was believed that swimming in the river or jumping over the bonfire during this feast is very good for a man's health, and by fulfilling this ritual a man will be healthy the whole future year long. It was also considered that herbs also acquired "healing properties" that day, that is why then people often gathered different herbs for a future use. During the feast of Ivan Kupala people also sang amorous songs, sang and danced in a ring; girls threw garlands of flowers on the water to find out who their future husband will be. It was said that evil forces grow stronger that day, the main legend connected with it is that only on the day of Ivan Kupala one can find the flower of fern that will help him to find treasures.
The palette consists of festive dark tones that work well in conveying the summer setting. The artist uses gold paint in subtle amounts to enhance the detailing in the clothing, landscape, and add some flair to the scene. This only works to make the already great depth, compositional flow, and colors that much more aesthetic in the overall distribution of visual brilliance in the scene.
The brushwork is exquisite, which is enhanced by the hairline gold detailing he adds. This piece shows that geometrical, artistic, and technical exploitation, when in perfect harmony can yield tremendous results.
The box is made out of paper-mache. Black lacquer covers the exterior and red lacquer covers the interior of the box. Gold ornamentation frames the scene on the lid and wraps around the sides of the box. The patterns are floral based and seem as if they roll in endless succession one after the other. The box has a hinge from the top of the composition and rests on four legs. The work is signed with the artist's name, village, and the year (2013) at the bottom of the composition.