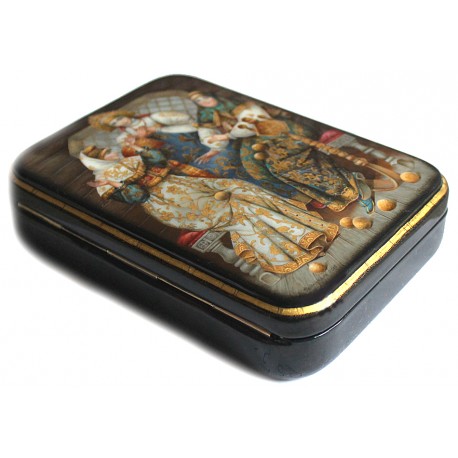 Prominent Fedoskino artist Boris Shavirin has painted this composition based on well-known Pushkins phrase "If I would be a Tsarina..." World-known Tale of Tsar Sultan written by famous Russian poet Alexander Pushkin is started with this phrase...

Prominent Fedoskino artist Boris Shavirin has painted this composition based on well-known Pushkins phrase "If I would be a Tsarina..." World-known Tale of Tsar Sultan written by famous Russian poet Alexander Pushkin is started with this phrase...

At these words their chamber door
Gently creaked and lo, before
These three maidens' very eyes
Stood their tsar, to their surprise.
He had listened by their gate
Whither he'd been led by fate,
And the words that he heard last
Made his heart with love beat fast.
"Greetings, maiden fair," said he -
"My tsaritsa you shall be,
And, ere next September's done,
See that you bear me a son.

Of course, collectors who are familiar with the works of Oleg Shapkin will say that it is painted in a style of Shapkin. Even so, the work is of the best quality and in some moments student has made the work even better than a teacher...
The artist confirms, that this is his original artist creation/scene.
The palette incorporates brown and green oils as the action takes place in front of the window of a wooden house, with addition of gold and silver metal paints to give a feeling of magic and splendor. The artist demonstrates his unsurpassed skill while painting the maiden's festive attire. Painting with an ultra fine brush, he creates exquisite gold lace texture of the dresses. The effect of festivity is strengthened by several pieces of mother-of-pear of different colors inlaid into their costumes(white to the left and green to the right maiden). Another piece of mother-of-pear is shining through the window.
The scene is framed with a gold band. The box's sides are adorned witha pattern that imitates a brown marble.
The box is constructed from paper-mache. Black lacquer is used to paint the exterior of the piece while red lacquer completes the interior of the work. The lid is hinged to the left of the composition, and the box rests flat. Signed with the artist's name, Fedoskino and the year of 2015.