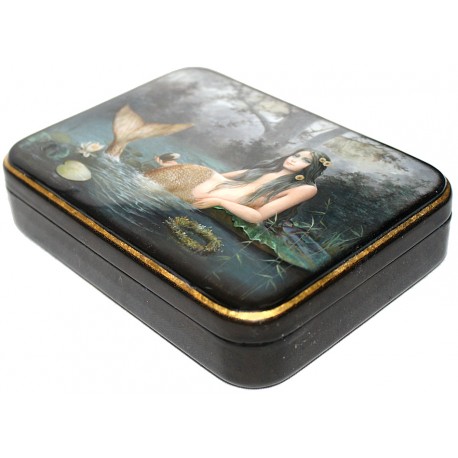 This composition is an original master work of talented Boris Shavirin.

This composition is an original master work of talented Boris Shavirin.The artist is enchanted with the Russian folklore, and likes to paint his works on the themes of Russian fairy-tales and legends. This box continues theses themes and shows a spirit and a character of some Russian tales known as Mermaid.
A mermaid is a legendary aquatic creature with the upper body of a woman and the tail of a fish. Mermaids appear in the folklore of many cultures worldwide, including the Near East, Europe, China, and India. The first stories appeared in ancient Assyria, in which the goddess Atargatis transforms herself into a mermaid out of shame for accidentally killing her human lover. Mermaids are sometimes depicted as perilous creatures associated with floods, storms, shipwrecks, and drowning. In other folk traditions (or sometimes within the same tradition) they can be benevolent, bestowing boons or falling in love with humans.
Mermaids are associated with the Sirens of Greek mythology and with the Sirenia, a biological order which comprises dugongs and manatees. Historical sightings by sailors may have been the result of misunderstood encounters with these aquatic mammals. Christopher Columbus reported seeing mermaids while exploring the Caribbean.
Mermaids have been a popular subject of art and literature in recent centuries. Danish author Hans Christian Andersen wrote his popular fairy tale "The Little Mermaid" in 1836. They have subsequently been depicted in opera, paintings, books, films, and comics.
This box depicts the mermaid sit on a bank of a pond. On the background we can see forest trees.
The box demonstrates Shavirin's impeccable skills in miniature painting. Gray and green tones of oils are predominated on this composition.The mermaid's body is detailed with bright gold paint. There are several pieces of mother-of-pearl inlaid in the composition. Two are in the skies, two are in the body of the mermaid and three are in the water-lilies!
The box is made out of paper-mache. The lid is hinged from the top of the scene, and the box rests flat. The interior of the box is covered with red lacquer.The work is signed with the artist's name, date and Fedoskino.