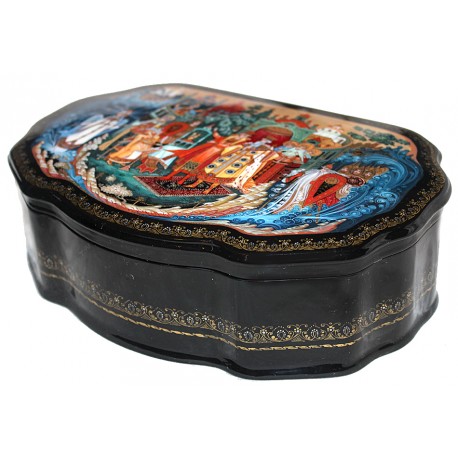 Talented Kholui artist Irina Kuznetsova has painted this interesting and elaborate work. The composition features several scenes from Pushkin's well-known "Tale of Tsar Saltan".
By the tsar's order, Tsar Saltan's wife and his son, Prince Gvidon, were sealed in the barrel that afterward was thrown into the sea. The barrel landed to a mysterious island. Getting out of the barrel Prince and his mother saw a magnificent palace where they would live later. Then Gvidon has save Princess Swan from an evil bird.
Prince Gvidon, his wife, and his mother meet the ship on the board of which Tsar Saltan is sailing. Tsar Saltan heard much about the mysterious and rich island ruled by Prince Gvidon and his young beautiful wife, and now he has come to know if this island is indeed so rich and beautiful.
The details in this composition expose Kuznetsova as a true Master of his craft! Numerous characters are expressive, and painted with natural expressions. The palette includes yellows, blues, reds and various shades of brown. The work demonstrates a mastery of color combination and fine detail!
Almost in the middle and a bit to the left- there is a Magic squirrel, on the right part of the composition- 33 champions and their uncle Chernomor...
The box's lid is decorated with intricate gold patterns; the sides are decorated with silver and gold ornamentation.
The box is made out of paper-mache. Black lacquer covers the exterior and red lacquer covers the interior of the box. A hinge has been fastened to the top of the scene, and the box rests flat. The work is signed with the artist's name, Kholui, and the title.