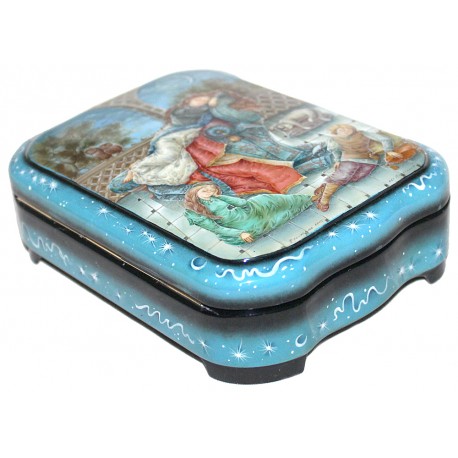 Tale of the Sleeping Beauty

Fedoskino Master Pichugina Margarita is the talented miniaturist who handcrafted this stunning piece of artistic expression!

Fedoskino Master Pichugina Margarita is the talented miniaturist who handcrafted this stunning piece of artistic expression!
The painting is based on the popular story of, "The Sleeping Beauty". This story was originally put to pen by French writer Charles Perrault in 1696. The little long-awaited Princess was born in the kingdom. Her parents organized a sumptuous feast and invited seven young fairies. In those times fairies had a marvelous custom to endow their goddaughters with merits and virtues. When the feast was about to begin, the aged fairy appeared whom no one had thought to invite because people supposed her to be dead or bewitched. She declared that the princess would prick her hand with a spindle, and die of it. The King, the Queen, and all the guests were very afraid of this terrible gift. But at this moment one of the young fairies said: "Take comfort, your Majesties, your daughter won't not die. The princess will indeed prick her hand with a spindle. But instead of dying she will merely fall into a profound slumber that will last a hundred years. At the end of that time a king's son will come to awaken her". The prophecy came true. But not only the princess but the whole kingdom fell into a deep sleep.
Here Pichugina has painted the moment from this story - the princess pricks her finger with the spindle and falls into a profound slumber together with all her kingdom. We can find a spindle on the floor near the Princess...
The artist's palette is diverse, but the predominance is given to the shades of green, blue, red and brown. A piece of mother-of pearl is put under the dress of the princess, and that makes the composition radiate with a tremendous glow.
The edges of the lid and the box's sides are decorated with intricate blue and white color ornamentations.
The work is signed with the artist's name, Fedoskino and the year of 2015.