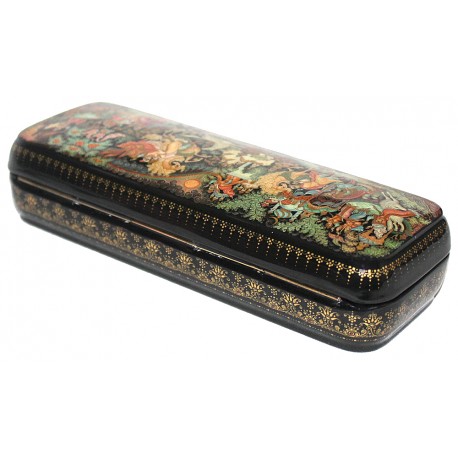 This interesting composition shows us major moments from popular Russian tale of Ivan Tsarevich and the Grey Wolf. Composition is painted very presize by Kholui prominent artist Veselova Veronika.
In this tale Ivan is going through different trials. Ivan has done it and he is taking the winnings for all they are worth. He has Yelena the Fair, the Firebird, and the Horse with the Golden Mane. All of this was made possible from help provided by the Gray Wolf. It was the wolf who bit the head off of Ivan's original horse. He felt bad for Ivan and decided to help him find what he was looking for. It was at the palace where the Firebird was kept that Ivan got into the most trouble. He accidentally touched the cage, which sounded the alarm. If he would have only grabbed the bird he would have been alright. When the Gray Wolf got him out of that mess and another regarding the Horse with the Golden Mane, Ivan needed one last thing. As Ivan was coming back to his father's kingdom with the horse, the Fire-bird, and Yelena his brothers ambushed him and killed him in a jealous rage. The wolf, after hearing the news, was able to obtain the water of life and death to revive him so he could return and tell his father what his brothers did to him.
Veronika Veselova is a rising artist in Kholui, and is sure to be one of the masters in years to come. Her works already show a skill for both extremely small detail and small scenes, as well as an eye for design and layout on larger pieces such as this one. Egg-tempera paint is the main medium used to paint this composition. The palette is based in greens and reds that make complementary combinations throughout the scene. Gold is used to highlight and detail a small portion of the total surface area of the composition, but its sparkle naturally enhances the great depth and epic mood set by the theme.
The box is made out of paper-mache. Black lacquer covers the exterior and red lacquer covers the interior of the box. Golden ornament frames the composition, while another ornamentation wraps around the sides of the box. The box has a hinge above the composition and rests flat. Upon completing the work on this piece the artist writes Kholui,2015 and signs his name at the bottom of the composition.