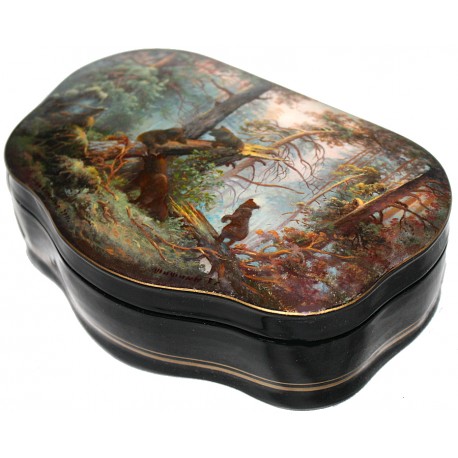 Morning in the Wood

This composition was painted by a talented artist Shishkin Evgeniy from the village of Fedoskino.
It shows how Russian lacquer miniature artists are able to bring hand-painted masterpieces into regular people's homes.

This composition was painted by a talented artist Shishkin Evgeniy from the village of Fedoskino.
It shows how Russian lacquer miniature artists are able to bring hand-painted masterpieces into regular people's homes."Morning in the Woods" as this work is entitled was originally painted on canvas by Ivan Shishkin. Exhibited in the Moscow's Tretyakov Gallery, it is one of the most popular pieces viewed in the entire museum. It has become something of a national symbol for Russia, which lacquer miniature artists were quick to adopt into their work.
Painted originally in 1889, the scene shows a mother bear watching her three cubs playing on the fallen trunk of a tree. The landscape, executed in transparent technique, presents real Russian impenetrable thickets with mighty firs and pines, lacy foliage and lush grass.
Greens and browns make up the tonal majority in the foreground, while the artist paints the background with aluminum paint in the under layers. By doing this on one of the first layers that was painted, and building on top with layer upon layer of paint, the artist creates a good sense of compositional depth. This helps to convey the infinity of the forest in the background, and also put the foreground into clearer focus. The brushwork is impeccable, which reveals the intricate details throughout the foreground. Each bear is painted as Shishkin had them in his work, and they are the single element in this work that defines it as a masterpiece. The painting is filled with the sensation of magnificent wild nature of the Russian North.
The composition is framed with a golden border, the sides are decorated with two parallel gold lines.
The box is made out of paper-mache. It has a hinge from the top of the composition and rests on a wavy platform. Black lacquer covers the exterior and red lacquer covers the interior of the box. The work is signed with the artist's name, 2011 and the village of Fedoskino.