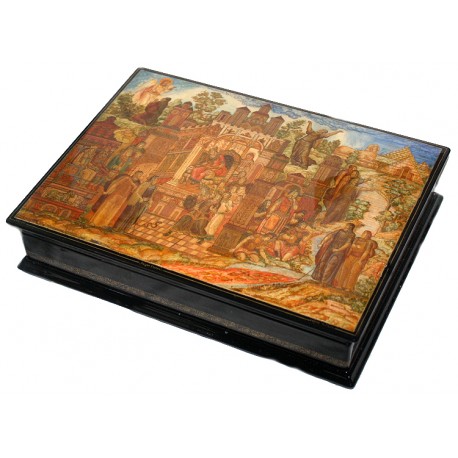 The ten Executions Of Egyptian

This impressive biblical scene was painted by Mstera Master Alexander Gaun. The artist has already created a series of works based on various biblical subjects such as "Flood", "Exodus", "Gogotha", "Judas Treachery", and this piece continues this list of religious works.
Some historical facts.

This impressive biblical scene was painted by Mstera Master Alexander Gaun. The artist has already created a series of works based on various biblical subjects such as "Flood", "Exodus", "Gogotha", "Judas Treachery", and this piece continues this list of religious works.
Some historical facts.
The Jewish people was in Egyptian slavery 400 years. The mere fact that the people of Abraham and Joseph, who made quite a lot for Egypt, treated so cruelly, making them powerless slave is awful. But even more terrible, as it seems to me the humility with which for many centuries was the humiliation, the Jewish people. The birth of Moses became the starting point towards the Jewish people to freedom. But, between the moment when he appeared at the light, and a minute, when God opened his appointment, he was 80 years old. Yes, when Moses led the Israelites out of Egypt, he was already quite an old man. Nevertheless, it is to him and requested the Lord to release people from slavery.
With regard to the killings of Egyptian, of course, God has imposed on the Egyptians really terrible punishment.
There were ten executions.
The first penalty-blood test where in Egypt and the Nile, and in all reservoirs water ceased to be suitable for drinking. As Jews feel of crazy thirst for freedom, and the Egyptians were to feel pure physical thirst and the need for the quench.
The second penalty-penalty frogs. Thousands of frogs and toads are overcrowded with Egyptian lands.
The third penalty-invasion of Blackflies, which turned the lives of Egyptians in hell.
The fourth penalty-penalty with bigger flies, who ruthlessly bites when they attack.
Fifth penalty- death of cattle. But only Egyptian cattle was death.
The sixth penalty- sores and abscesses. They say that spiritual filth human outwardly appears in scary diseases.
The seventh penalty-fiery hail. Fire-refining and the beginning of a new life.
The eighth penalty-locusts.
The ninth penalty - dive into darkness.
And the tenth penalty-execution of the first-born. The first baby was in Egypt on the special situation. It transferred all the rights and privileges, he was the successor of the traditions.
The box is constructed from paper-mache. Black lacquer is used to paint the exterior of the box while red lacquer completes the interior of the work. The scene is framed with a gold line while the box's sides are decorated with golden ornament. The lid is hinged from the top of the scene, and the box rests on four legs. The work is signed with the artist's name, name of the work-"The ten Executions Of Egyptian" and Mstera.