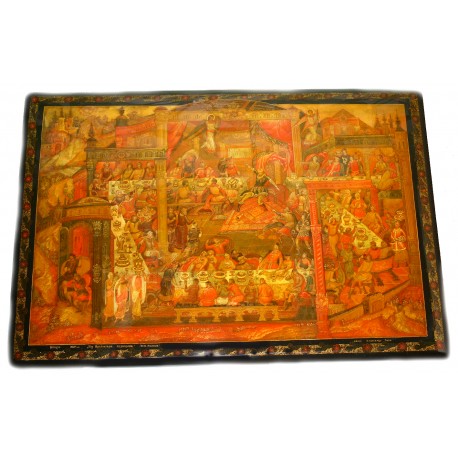 This impressive biblical story was painted by Mstera's Master Alexander Gaun. The artist has already created a series of works based on various biblical subjects such as "Flood", "Exodus", "Gogotha", "Judas Treachery", and this piece continues this list of religious themes.

This impressive biblical story was painted by Mstera's Master Alexander Gaun. The artist has already created a series of works based on various biblical subjects such as "Flood", "Exodus", "Gogotha", "Judas Treachery", and this piece continues this list of religious themes.
On this composition the artist has painted the biblical subject of Belshazzar's Feast.
Belshazzar "Bel, protect the king", sometimes called Balthazar, was a 6th-century BC prince of Babylon, the son of Nabonidus and the last king of Babylon according to the Book of Daniel in the Hebrew Bible. In Daniel 5 and 8, Belshazzar is the King of Babylon before the advent of the Medes and Persians. Although there is evidence that Belshazzar existed, his famous narrative and its details are only recorded in the Book of Daniel, which tells the story of Belshazzar seeing the writing on the wall. In Daniel Chapter 5, the details start off by there being a banquet for a thousand of his lords. Belshazzar next orders the vessels of gold that were taken from the Temple in Jerusalem, to be brought so that everyone can drink wine from them and praise their gods. It is at this moment that a man's hand appears and starts to write on a wall. Belshazzar's countenance is stated to have changed and he cries out to bring in his astrologers, Chaldeans and Soothsayers and that whoever interprets the writing will be made the third highest ruler in the kingdom. The queen comes in and suggests that he call for Daniel who is by now an old man because Nebuchadnezzar made him his chief of the Magicians, Astrologers, Chaldeans, and Soothsayers. Belshazzar offers Daniel the position of third highest ruler in the kingdom if he can interpret the writing but Daniel doesn't want to be rewarded. Daniel interprets the writing, what it means for Belshazzar and consequences for him. Belshazzar immediately makes Daniel the third highest ruler in the kingdom anyway. The last two verses state that that very night Belshazzar was slain and Darius the Mede received the kingdom, being about sixty two years old. Belshazzar was the son of Nabonidus, who after ruling only three years, went to the oasis of Tayma and devoted himself to the worship of the moon god Sin. He made Belshazzar co-regent in 553 BC, leaving him in charge of Babylon's defense.In 540 BC, Nabonidus returned from Tayma, hoping to defend his kingdom from the Persians who were planning to advance on Babylon. Belshazzar was positioned in the city of Babylon to hold the capital, while Nabonidus marched his troops north to meet Cyrus. On October 10, 539 BC, Nabonidus surrendered and fled from Cyrus. Two days later the Persian armies overthrew the city of Babylon.
The composition is set horizontally. The coloring of the composition is typical for Gaun's painting style. It is based on harmonious combinations of three main colors: brown, red and yellow.
The composition is framed with a gold line, then decorated with beautiful gold floral ornamentation with red flowers . The plaque is constructed out of paper-mache. Black lacquer covers the exterior of it. The box has metal string to hang it with on the back side.
The work is signed with the artist's name, the village of Mstera and the title "Belshazzar's Feast" , at the bottom of the composition.