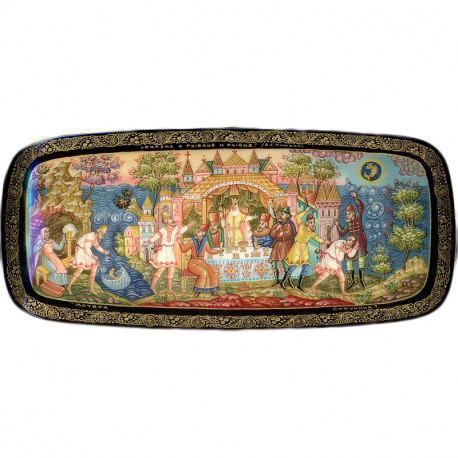 This colorful lacquer miniature depicts scenes from a 1833 poem by Russia's great poet Alexander Pushkin. In the center of the composition is the court of the old woman. She is now a high-born lady and the ruler of the land. At her palace a grand table is set. With numerous guards and ministers, she sits in a throne and partakes of the fine wine and exotic sweets. The simpleton husband is summoned to fetch the golden fish yet another time.

Go back, make your bow to the great fish.
I'll no more be a mighty Empress
But will rule over Sea and Ocean.
In the Deep I will make my stronghold
And the golden fish shall serve me
And swim back and forth on my errands.
So, the old man is taken out of the shiny palace by one of the guards. He now has to face the Golden Fish for the last time.

Again he went down to the ocean
And saw-a black storm had arisen:
Angry waves reared up to meet him,
All a-quake, all a-swirl, all a-roaring.
But he raised his voice and shouted,
And the golden fish came swimming:
"What is it, old man, come, tell me! "
With a low bow the old man made answer:
"Be gracious, Lord of Fishes!
What can I do with the woman?
The old fool will no longer be Empress,
She will rule over Sea and Ocean;
And have you yourself to serve her And swim back and forth on her errands."
The golden fish said nothing;
With a flick of its tail in the water
It swam away, back to the deep sea.

And the grand finale: everything is back to square one!

The old man by the shore stood waiting
For a long time, but got no answer.
At last, he returned to his good-wife
And lo: There she sat on the threshold
Of their old hut of clay and wattle
And before her-the broken wash-trough.

Tatyana Strunina of Mstera painted this bright composition. Using egg-tempera paints she weaves a fabulous visual tale from one of Russia's great fairy tales. Her palette uses a diverse mixture of colors that complement each other on the scene. She paints the composition according to icon painting principles that allow artists to disregard time, and most importantly space. The manipulation of the composition from a spatial point of view, shows a tightly framed scene in which three areas that in reality are very far away. She uses gold paint to accent the composition and make a viewer want to be attracted to it. Every detail is delicately manipulated for a great overall effect.
The box is made out of paper-mache made in Mstera. Black lacquer covers the exterior and red lacquer the interior of the box. Gold ornamentation frames the composition and runs around the sides of the box. It hinged at the top of the composition and rests on four wavy legs. The work is signed and titled by the artist.