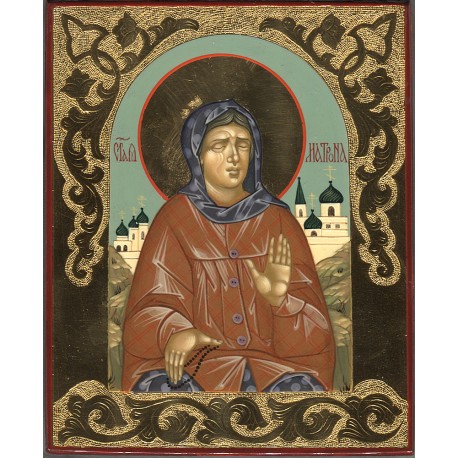 This icon has been painted by a talented artist Rizhskaya Valeriya of Kholui.
On this icon the artist has painted an image of St. Matrona, the Blessed Elder of Moscow.
Here is her story.

This icon has been painted by a talented artist Rizhskaya Valeriya of Kholui.
On this icon the artist has painted an image of St. Matrona, the Blessed Elder of Moscow.
Here is her story.
Matrona Dmitrievna Nikonova, the Blessed Eldress of Moscow, (1885 - May 2, 1952), also referred to as Matrona of Moscow. Matrona is a canonized saint of the Russian Orthodox Church, which claims that, from early childhood, she had the gift of prophecy, spiritual vision, and healing.
Matrona was born to Dmitry and Natalia Nikonov in the village of Sebino in Tula Province. She was the fourth child in the family. Her struggling parents planned to place her in an orphanage after her birth but her mother changed her mind after she had a dream, in which she saw that a white bird of divine beauty, with empty eye sockets, landed on her breast. When Matrona was born, she was blind, with eyelids closed over empty eye sockets. Her mother took this as a heavenly sign. According to legend, by the time she was eight, she had revealed prophetic and healing powers.
Following the Russian Revolution of 1917, she and her friend Lydia Yankova became homeless peasants who left their villages to find work and food in larger cities. By 1925, Matrona moved to Moscow, possibly following her two brothers, and took to a life of wandering, finding shelter with friends and relatives in houses, apartments, and basements. She could not stay with her two brothers, both Communists, because Matrona preached the Russian Orthodox faith.
At a time when other religious people were sent to GULAG or sent into exile for their beliefs, no one ever betrayed Matrona's location. People continued to come to Matrona for advice and for help with their troubles.
A story, related by her biographer, Zinaida Zhdanova, tells how Matrona told Zinaida's mother, Evdokia, described as being a plain 28-year-old, that she would marry a handsome nobleman. Evdokia moved to Moscow and became a cook at the house of a rich nobleman whose son, Vladimir, was betrothed to one Shukhova. Shortly thereafter, Vladimir is said to have had a dream in which a voice told him to marry a woman named Evdokia. The next morning he asked if there was such a woman in the household, met her, and nearly fainted. Later, he was sent for training to Perm with Evdokia, and Zinaida was born shortly thereafter.
In another of her reported miracles, she helped a college architecture student revise a paper required for graduation by describing in detail some of the great architectural achievements in Florence and Rome, including the Palazzo Pitti.
She is said to have predicted her own death three days in advance, accepting all visitors during those final days. Following her death in 1952, her grave site became a pilgrimage site. She was recently canonized by the Russian Orthodox Church. Her remains are now in the Church of the Protecting Veil of Our Lady at Intercession Convent in Moscow. The lines of people waiting to visit her grave site is reported as regularly being quite long (often needing three or four hours to make a short visit to the grave site) and well-behaved, which some have stated is rather unusual in Moscow.
Her day is commemorated by Orthodox Church on May 2.
This icon has been painted in the village of Kholui on the wooden base. According to the tradition of Russian icon painting, the work is painted in egg tempera paints and detailed with brilliant gold paint. The leaves of gold is also used to create a frame around the depicted icon.
Very often Palekh, Mstera and Kholui artists paint icons, and this decision isn't influenced by a fashion or a public demand. It is a century-old tradition. The schools of Palekh, Kholui, and Mstera appeared under the influence of icon painting.