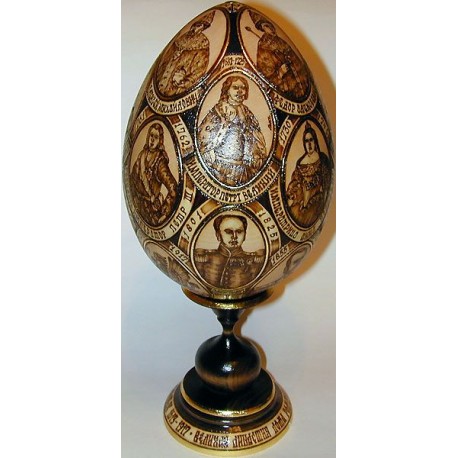 This huge Easter egg has been created in the ancient Russian town of Sergiev Posad by the talented master Oleg Listunov .

This huge Easter egg has been created in the ancient Russian town of Sergiev Posad by the talented master Oleg Listunov . The work is dedicated to the Monarchical House of Romanovs, and features the rulers of the Russian State referred to the representatives of the Romanov's family. It is known that the first reining dynasty in ancient Rus was the dynasty of Ruriks. The last representative of this dynasty was Ivan the Terrible, while the first reprehensive of the new reining dynasty was Mikhail Feodorovich Romanov (reined from 1613 till 1645). So, this egg portrays the rulers of the Russian State beginning with Mikhail Feodorovich Romanov and finishing with the tsar- martyr, Nikolay II (reined from 1894 till 1917).
Looking at this magnificent egg we can learn more about the history of Russian and familiarize ourselves with its rulers (from top to bottom): Mikhail Feodorovich Romanov (1613-1645), Aleksey Mikhailovech Romanov (1645-1676), Fyodor Alekseevich (1676-1682), Princess Sofya (1682-1689), Ioann V Alekseevich (1682-1696), Peter I the Great (1682-1725), Catherine I (1725-1727), Peter II (1727-1730), Regent Anna Ioanovna (1730-1740), Empress Elizaveta Petrovna (1741-1761), Emperor Peter III Feodorovich (1761-1762), Empress Catherine II the Great (1762-1796), Pavel I Petrovich (1796-1801), Emperor Alexander I Pavlovich (1801-1825), Emperor Nikolay I Pavlovich (1825-1855), Emperor Alexander II Nikolaevich (1855-1881), Emperor Alexander III Alexandrovich (1881-1894), Emperor Nikolay II Alexandrovich (1894-1917).
To produce this work the artist has applied the unique technique of poker-work. All portraits are outlined, highlighted and detailed by means of this unique technique. Each portrait is framed with a brilliant gold line; beneath it there is the name of the portrayed ruler, and above it the period of his or her reign is written. The egg is made out of wood. It rests on the wooden pedestal detailed with gold paints; the following inscription is written on it: "Great Russia. Rus. Be indivisible as God is a single whole in his three forms. God isn't in force, he is in the truth."