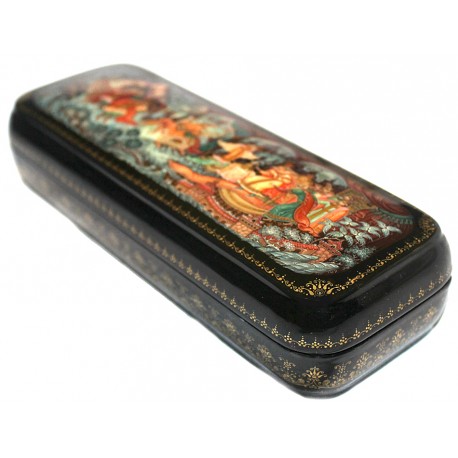 Emelya or By the Pike's Will

This interesting box shows one of the key episodes from the popular Russian fairy-tale "By the Pike's Will" or "Emelya and the Magic Pike".

This interesting box shows one of the key episodes from the popular Russian fairy-tale "By the Pike's Will" or "Emelya and the Magic Pike".
In short, this tale is about a young man who finds a special fish when he goes to get water from the river. In return for releasing her, the Magic Pike offers to fulfill Emelia's wishes. Being a lazy fellow, Emelya light-heartedly uses magic forces, asking the pike to help him to perform his chores while he relaxes. He orders his water-pails to go home by itself, which they do, much to the surprise of his sisters-in-law. Then he orders the sledge to go by itself to the nearest forest where his ax falls wood for the fire. Afterwards he gets to the tsar's palace, riding a stove. In the palace he meets the tsar's daughter and falls in love with her. The tale ends happily and finally Emelya marries the tsar's daughter.
The scenes depicted on the box shows key episodes from this tale: Emelya sits on the stove that goes by itself straight to the Tsar's palace where he will meet the Tsar's daughter, his future wife.
The box was painted by Veronika Veselova, a prominent artist in Kholui. Her works already show a skill for both extremely small detail and small scenes, as well as an eye for design and layout on larger pieces such as this one. Egg-tempera paint is the main medium used to paint this composition. The palette is based in greens and reds that make complementary combinations throughout the scene. The action moves seamlessly across the scene with subtle transitions into each that are made by the landscape. Painting the sky green leaves a bold foundation for the rest of the colors in the composition to come alive under. Gold is used to highlight and detail a small portion of the total surface area of the composition, but its sparkle naturally enhances the great depth and epic mood set by the theme.
The box is made out of paper-mache. Black lacquer covers the exterior and red lacquer covers the interior of the box; clear lacquer is added in layers that are polished to a gleaming finish. Golden ornament frames the composition, while ornamentation wraps around the sides of the box with an expansive format and red accents. The box has a hinge above the composition and rests flat. Upon completing the work on this piece the artist writes the title, Kholui, and signs his name at the bottom of the composition.