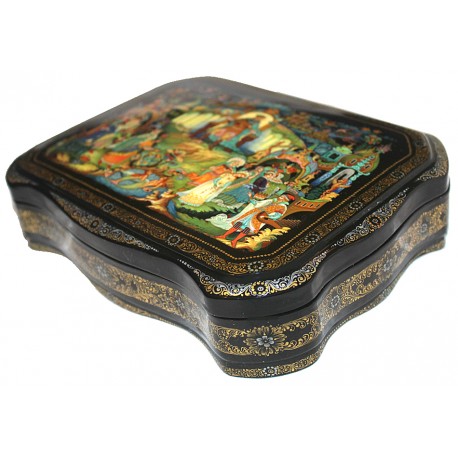 This fascinating box has been painted by well-known Palekh artist Natalie Kornilova. It depicts several scenes from the Russian fairy-tale "Sadko".

This fascinating box has been painted by well-known Palekh artist Natalie Kornilova. It depicts several scenes from the Russian fairy-tale "Sadko".
The tale tells about the exciting adventures of a musician Sadko. Once he was playing his gusli and singing a beautiful song on the riverbank. Suddenly, the Water Elf, enchanted with the wonderful tune, rose out of the lake and rewarded Sadko by telling him a secret. The next day there was a big feast at a merchant's house. The guests started to boast about their wealth. They asked Sadko to join them. He replied modestly that he was not a wealthy man, but he knew one secret - there was a magic golden fish in the Lake Ilmen, which would restore youth to anyone who ate it. The merchants swore that if Sadko could catch that fish they would give him all their goods. Surprising everyone, he caught the golden fish and became one of the richest men in Novgorod. He built a big palace, married a lovely girl named Lubava, and became a prosperous merchant. Once during one of his voyages, he had to throw himself into the sea to appease the Sea Tsar. He came to the Sea Tsar's court, and played his gusli (a musical instrument), while the Sea Tsar danced, causing a great disturbance in the sea. As a result of it, ships were sinking, people were dying. Having realized it, Sadko stopped playing. The tale ends happily: Sadko managed to escape from the underwater kingdom of the Sea Tsar and return to his beloved wife Lubava. The compositions are filled with diminutive details. Some of them are not discernible without the help of a magnifying glass. The expressive detail within the characters and the elaborate nature of the architecture are the two most impressive facets of these composition. Creativity and tradition are abundant.
The box is made out of paper-mache. Black lacquer covers the exterior and red lacquer covers the interior of the box. The box rests on wavy platform. The box is signed with the name of the artist, village and year. This box would be an excellent addition to any collection!