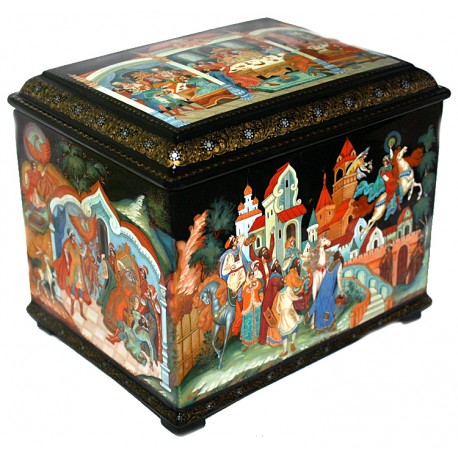 This large five-sided casket has been painted by a talented Palekh artist Natalie Brovkina. The box's lid and all its four sides show the scenes from different Russian folk fairy-tales!

This large five-sided casket has been painted by a talented Palekh artist Natalie Brovkina. The box's lid and all its four sides show the scenes from different Russian folk fairy-tales!

The box's front side depicts a final scene from the fairy-tale "Sivka-Burka". In this tale Ivan has jumped on Sivka-Burka, kissed a princess in a window and took a golden ring from her finger and in the end has married her.

The painting on the right side is based on the popular story of, "The Sleeping Beauty." This story was originally put to pen by French writer Charles Perrault in 1696, but in Russia it is known after poetry of Alexander Pushkin.
The little long-awaited Princess was born in the kingdom. Her parents organized a sumptuous feast and invited seven young fairies. In those times fairies had a marvelous custom to endow their goddaughters with merits and virtues. When the feast was about to begin, the aged fairy appeared whom no one had thought to invite because people supposed her to be dead or bewitched. She declared that the princess would prick her hand with a spindle, and die of it. The King, the Queen, and all the guests were very afraid of this terrible gift. But at this moment one of the young fairies said: "Take comfort, your Majesties, your daughter won't not die. The princess will indeed prick her hand with a spindle. But instead of dying she will merely fall into a profound slumber that will last a hundred years. At the end of that time a king's son will come to awaken her." The prophecy came true. But not only the princess but the whole kingdom fell into a deep sleep. And in the happy end the handsome prince who has come to the enchanted kingdom to destroy the evil spell and awake the princess by his sweet kiss.

On the back side we can see one of the interesting moments from tale of "Frog Princess".
A powerful Tsar noticed that it was time for his three sons to be wed. He summoned them all at once and told them to each fire a single arrow into the air. The closest maiden to each fallen arrow would become that son's wife. Ivan and his two brothers shoot arrows into the air to find their future brides. A frog catches Ivan's arrow and this is who he is obligated to marry. Ivan Tsarevich has found and burn the frog skin of his wife, Vasilisa the Wise (his arrow fell in the swamp near the frog, and he had to marry this frog but later it turned out that the frog was the animal form of the beautiful bewitched girl). In the center of the composition Vasilisa the Wise creates a miniature lake full of white swans with just one nonchalant wave of her hand while dancing before the tsar. In the right upper corner Ivan Tsarevich consults with Baba-Yaga trying to find out where he can find his wife, Vasilisa the Wise. This scene is very interesting painted. Baba-Yaga's hut on chicken feet differs from standard huts on chicken feet usually painted by various artists. More over near Baba-Yaga the artist has depicted her pygmy domestic dragon that replaces a cat or a dog. In the right bottom corner Ivan Tsarevich speaks with birds that later will help him to kill Koshchey who imprisoned Vasilisa the Wise. Just above this scene there is Koshchey's palace with imprisoned Vasilisa sitting inside. Nearby the artist has depicted also rather originally painted Koshchey in his animal form. In the right upper corner Ivan Tsarevich and Vasilisa the Wise return to their native kingdom.
The composition shows a scene from a Tale of Frog Princess- the Feast when the Frog turned to a beautiful lady and made the best food and entertain the guests with a nice dance.

On the left hand side we can see fragments from a tale of a Little hump-backed horse.
Once upon a time onne of three sons- Ivan caught the magic mare that trampled down wheat on his father's field. This mare promised Ivan to present three foals in exchange for freedom. Later two of these foals turned into the steeds with golden manes while the third one turned into the Humpbacked Little Pony. The old greedy tsar obliged Ivan to fulfill different tasks, and the Humpbacked Little Pony always helped him. One of them was to catch and bring Fire-Bird. This task was succesfully fulfilled with the help of Hump-backed horse.Then tsar askeed for the last errand: instead of the tsar Ivan dipped himself in three cauldrons of boiling water, boiling milk and ice cold water, and transformed into a very handsome young man! After Ivan tsar has jumped in the first cauldrons and has boiled there...And , of cource, Ivan married after that the best girl in Kingdom.

Top of the casket shows us the Marriage Feast of Prince Gvidon and Princess Swan from the tale of Tsar Saltan, also written by Russian genius Alexander Pushkin.
It shows a recognizable scene from Pushkin's Tale of Tsar Saltan. The sumptuous feast is arranged in Gvidon's palace to celebrate a reunion of the family. All people of the kingdom are invited to the feast.

Each scene is elaborately painted in tempera paints and detailed with gold paint. Gold and silver paint is also used to decorate the box's exterior with nice floral patterns. The box is constructed from paper-mache. Black lacquer is used to paint the exterior of the piece while red lacquer completes the interior of the work. The lid is hinged and the box rests on four legs. The work is signed with the artist name, Palekh and the title.