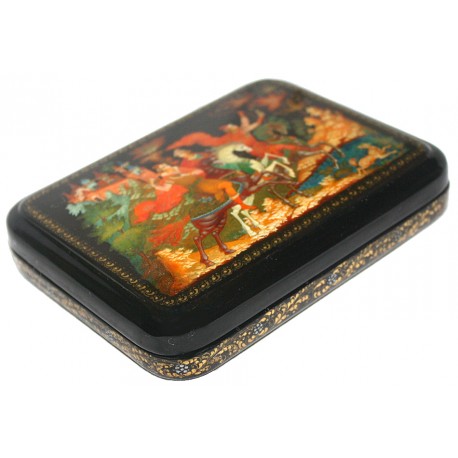 This small box was painted by the talented Palekh artist Vladimir Vlezko.

This small box was painted by the talented Palekh artist Vladimir Vlezko.
The original scene was painted by famous Russian painter Victor Vasnetsov in 1898. This oil on canvas is hang in The Tretyakov Gallery, Moscow, Russia.
Here we can see three famous Russian Bogatyrs:Dobrynya Nikitich, Ilya Muromets and Alyosha Popovich. The bogatyr (from baghatur, an old Altaic term for a warrior, a military commander, or an epic hero) or vityaz (a valiant warrior) was a medieval heroic warrior of Kievan Rus', akin to Western European knight errant. The most famous vityazs' were the trio of Alyosha Popovich, Dobrynya Nikitich and Ilya Muromets, who served prince Vladimir I of Kiev. Each of them tend to be known for a certain character trait: Alyosha Popovich for his wits, Dobrynya Nikitich for his courage, and Ilya Muromets for his physical and spiritual power and integrity, and for his dedication to the protection of his homeland and people. Alyosha Popovich - from town of Rostov, Dobrynya Nikitich - from town of Riazan (based on a historical warlord of Vladimir I)and Ilya Muromets, regarded as the greatest of the bogatyrs, from town of Murom(Vladimir's region).
The box is constructed from paper-mache. Black lacquer is used to paint the exterior of the box while red lacquer completes the interior of the work. The lid is hinged from the top of the composition, and the box rests flat. The work is signed with the artist's name, the year and the village of Palekh.