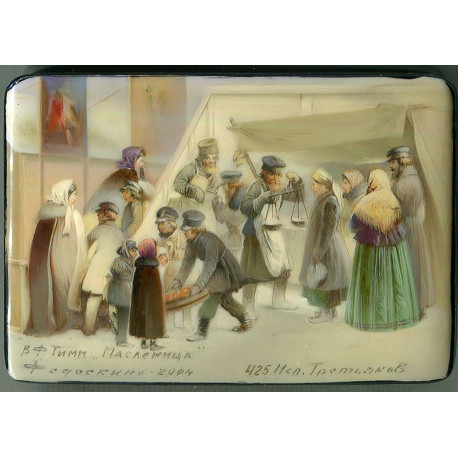 Victor Tretiakov, is the talented Fedoskino artist, who has painted this small, but detailed box.

The box is called "Maslenitsa" or "Pancake-week", and this is a small part of engraving made by Vasiliy Feodorovich Timm (1820-1895).
In former times, the Maslenitsa week preceding the 40-day Lent was one of the most important holidays of the year. Traditionally, since the XVIII century, at this time in St. Petersburg, national festivities were organized with fairs and booths, mountain rides, swings and other entertainment. Historic Dobuzhinsky accurately identified the place of Maslenitsa among the St. Petersburg holidays: "The most fun time in St. Petersburg was Maslenitsa and booths. Christmas and Easter were more like home holidays, Maslenitsa was a real national holiday and fun. People spent a lot time outdoors, drinking vodka and eat pan-cakes, visiting friends and relatives, dancing and signing...
It is not surprising that many artists wanted to capture the celebration of Maslenitsa in their works.
Engraving was the only stained glass art of the time, so engraved sheets, unlike paintings and watercolors, were always designed for a more mass audience. Often they were distributed by subscription and, among other things, played the role of a kind of news releases that informed residents of all Russia details of Metropolitan life. This means that Russia saw the St. Petersburg Maslenitsa exactly as it was depicted in the engraving.
The box is constructed from paper-mache. Black lacquer is used to paint the exterior of the box while red lacquer completes the interior of the work.
Two parallel gold lines wrap around the box's sides. The lid is hinged from the top of the scene, and the box rests on a flat bottom. The work is signed with the artist's name, Fedoskino, the year of 2004 , title- "Maslenitsa" and the name of the original ingraving- V.F.Timm.