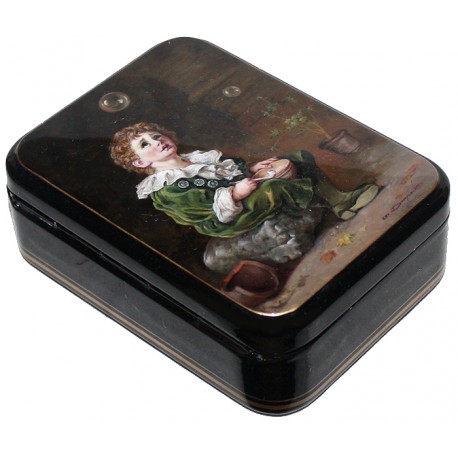 This beautiful box is an exceptional creation of talented Fedoskino artist, Yevgeniy Dokuchaev. The world-known composition " Bubbles" painted in 1885-86 by John Everett Millais inspired Dokuchaev to create this work.

This beautiful box is an exceptional creation of talented Fedoskino artist, Yevgeniy Dokuchaev. The world-known composition " Bubbles" painted in 1885-86 by John Everett Millais inspired Dokuchaev to create this work.
John Everett Millais(1829- 1896) was an English Pre-Raphaelite painter and illustrator. He was born in Southampton, England in 1829, of a prominent Jersey-based family. His prodigious artistic talent won him a place at the Royal Academy schools at the unprecedented age of eleven. His early works were painted with great attention to detail, often concentrating on the beauty and complexity of the natural world. By the 1870s Millais was the most successful artist in Britain, earning an impressive £30,000 annually and gaining international stature through exposure at a succession of World's Fairs.
One of the most famous paintings by the Victorian artist Sir John Millais has been placed on long loan at the Lady Lever Art Gallery. It has been lent by Unilever.
"Bubbles" was painted in 1885-6. It shows a boy blowing bubbles with a pipe and a bowl of soap suds. The boy was the artist's grandson, Willie James, aged about four: he later became an Admiral. To get round the problems of painting the bubbles, the artist had a glass sphere specially manufactured. Millais originally titled his painting "A Child's World" but it was later changed to "Bubbles".
As a young man, Millais was one of the chief artists in the Pre-Raphaelite Brotherhood, which set out to attack the complacency of the Royal Academy. He painted masterpieces such as "Isabella" (Walker Art Gallery) and "Ophelia" (Tate Britain) in a new style with bright colors, wiry outlines and minute detail. By the time he painted "Bubbles", Millais was in his 50s. He had abandoned the Pre-Raphaelite style and had adopted darker colors and looser brushwork. No longer a rebel, he had joined the Royal Academy and had become a pillar of the art establishment. Much of his work at this stage in his career featured sentimental portrayals of small children. Other examples, at the Lady Lever Art Gallery, are "Little Speedwell's Darling Blue" and "The Nest". Although "Bubbles" may appear sentimental to modern taste, it has a serious meaning. Millais was using a symbol with a long tradition behind it. "Bubbles" are fragile and have a brief moment of beauty before they burst. In the 17th century Dutch artists painted children blowing bubbles to convey the brevity of human life, the transience of beauty and the inevitability of death. This theme appealed to Millais and is a key to several other of his paintings, such as "Spring (Apple Blossoms)" also at the Lady Lever Art Gallery. Amongst the beauty of the young girls and the spring flowers in this picture, Millais painted a scythe, to indicate that beauty fades and that death awaits us all.
This aspect of "Bubbles" was not obvious to the Victorians. Victorian artists associated childhood with sweetness and innocence. The attitude is seen in the book illustrations of Kate Greenaway and in historical pictures such as "And when did you last see your Father?" by W. F. Yeames (Walker Art Gallery). It had also been seen in the 18th century in pictures like "The Age of Innocence" (Tate Britain) by Sir Joshua Reynolds, who was much admired by Millais. The interpretation of childhood changed radically after Freud wrote about it as a troubled period of latent sexuality, but it would be unhistorical to expect Millais to reflect these ideas in his work.
The painting was brought from Millais by Sir William Ingram, proprietor of the Illustrated London News, a popular magazine with a wide circulation. Ingram also bought the copyright from the artist. He published "Bubbles" as a special presentation color print with the Christmas number of the magazine in 1887. (Other paintings of children by Millais had been published with previous Christmas numbers with great success.)
Before its appearance in the magazine, the painting with its copyright was sold to A & F Pears, manufacturers of Pears soap. The Managing Director of Pears, Thomas Barrett, was a pioneer of modern advertising methods, and he and William Lever of Lever Brothers, makers of Sunlight Soap, were great rivals, each spending vast sums on promoting their brands.
Barrett turned "Bubbles" into an advertisement by adding a bar of soap in the foreground. Millais was furious, but he could do nothing about it. Millais was unfairly criticised for degrading his art, but as the copyright owner, Barrett was within his rights. And the use of the painting for advertising meant that the picture became the best known of all his works.
Lever responded to Barrett's initiative in 1889 by purchasing "The New Frock" by Frith and using this to advertise Sunlight Soap, again without the artist's permission. Frith's painting and others used for Sunlight Soap advertising, are now part of the Lady Lever Art Gallery collection.
In 1914 Lever Brothers acquired A & F Pears, and subsequently the company became part of the Unilever Group. Pears was retained as a separate brand and the company kept 'Bubbles' at its head office. It was recently on loan to the Royal Academy in London, and has now been transferred on long loan to the Lady Lever Art Gallery where it joins an already strong group of the artist's works.
The painting on the box is framed with a gold line; the box's sides are decorated with two parallel gold lines.
The box is constructed from paper-mache. Black lacquer is used to paint the exterior of the box while red lacquer completes the interior of the work. A hinge is fastened to the left of the portrait, and the box rests on a flat bottom. The work is signed with the artist's name-.