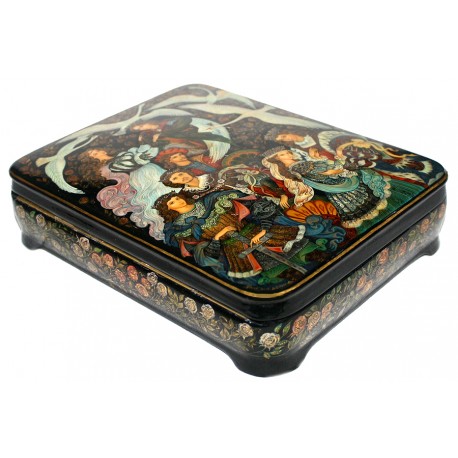 This exciting composition was created by the talented Vera Smirnova from the village of Palekh. She is a Palekh artist who is at the top of her field now. Many artists try to emulate her work and hers is what inspires them to paint in such a way.

This exciting composition was created by the talented Vera Smirnova from the village of Palekh. She is a Palekh artist who is at the top of her field now. Many artists try to emulate her work and hers is what inspires them to paint in such a way. This original work shows that her skill with the tempera medium is immense, by her depiction of the characters and their faces. It is rare that an artist has such a good blend of skill, talent, and technical knowledge, which she excels at with every new work she paints.
The composition shows the final scenes from the fairy-tale "The Wild Swans" written by Hans Christian Andersen. This tale tells about the little Princess Eliza whose brothers were turned into eleven wild swans by their wicked and cruel stepmother. The girl was very sorry for her beloved brothers and did everything that she could to release them from evil spell. Having undergone many severe trials and saving her dear brothers, she was rewarded in the end of the story: a young, handsome and rich Prince proposed marriage to her.
The artist has been able to tightly compose the characters to give the scene maximum efficiency, without looking crowded or bunched up. As customary with Palekh tradition, the artist uses the black lacquer exterior as the background for the composition. This intensifies the colors and especially the contours. The background towers and arches are expertly achieved. They've been painted with relaxing tones of blue, green, gray and aquamarine. The characters clothes are thoroughly contoured with bright gold and aluminum paint. This builds radiance and texture, both at the same time. For the most part, the pallet is based on green and blue tones with addition of yellows and reds. The shading and blending of paints is remarkable, and done so that it seem as if the artist were painting from a picture. However, she paints this directly from her mind, which adds to the allure of the piece and her expressive style.
This elegantly shaped box is made out of paper-mache. Black lacquer covers the exterior and red lacquer covers the interior of the box. Gold ornamentation wraps around the sides of the box. The box has a hinge on the left the composition and rests on the four legs. The artist has written her name, the village name of Palekh, the title and the year of 2013 at the bottom of the composition.