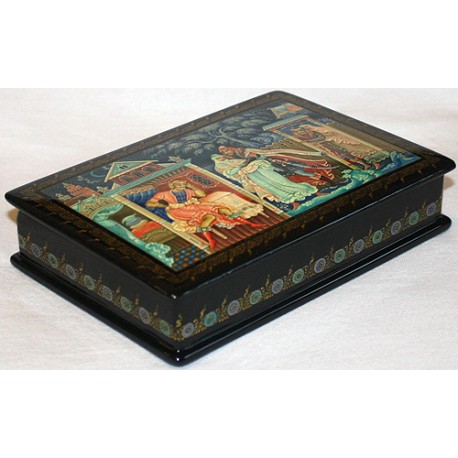 "The Merchant Kalashnikov," stands out from Lermontov's narrative poems for its consistent first person narrative viewpoint. It is not a monologue by a hero complaining about his fate; rather, the distinction between hero and narrator is not blurred. In fact, the narrator is a stylized "Singer" in the old Russian folk tradition who does not address the reader at all: his audiences are his fellow singers, the boyar Matvey Romodanovsky, and his lady.
In the best epic tradition, the singer plunges directly into the story. At the court of Ivan the Terrible, the Tsar notes that one of his favorite guards, or oprichnik, is downcast. Asked for a reason by the Tsar, the oprichnik Kiribeevich responds that he has fallen in love with a beautiful girl from a merchant family, Alyona Dmitrievna, but she will have nothing to do with him. The Tsar, sympathetic, gives him jewelry and other gifts, advising him to get a matchmaker and seek the girl's hand in marriage, but not to worry if he is rejected: "If you win her love, then celebrate your wedding. If not, then don't be angry!"
At this point the singer intrudes to say that Kiribeevich has misled the Tsar by omitting the pertinent fact that Alyona Dmitrievna is already married, and to the real hero of the tale, Stepan Paramonovich Kalashnikov, a successful and hard working merchant in the silk trade. He is introduced in Part II, as the scene shifts to the Kalashnikov home. Kalashnikov waits impatiently for his wife to return from church; when she does, she is in tears, and her clothes are torn. At first Kalashnikov is angry, but his wife explains that Kiribeevich accosted her on her way back from church. He had refused to let her pass, offered her gifts, laid hands upon her, and kissed her.
The palette consists of Fomichov's own special paints that he has made all by himself. The predominance is given to green and brown tones. The scene is painted and formed in Fomichov's distinct style, which is recognized around Russia and the world as purely his own. To form the composition he uses a series of frames: the one on the left frames Kalashnikov, the one in the middle frames Alyona Dmitrievna tearing away from Kiribeevich, and the one on the right shows witnesses to the event.
The box is made out of paper-mache from Mstera. Black lacquer covers the exterior and red lacquer covers the interior of the box. Gold ornamentation frames the composition, while another pattern accented with green and blue flowers runs along the sides of the box. The box has a hinge above the composition and rests on a flat bottom. The artist wrote Mstera, 2005, the title, and his name at the bottom of the scene.