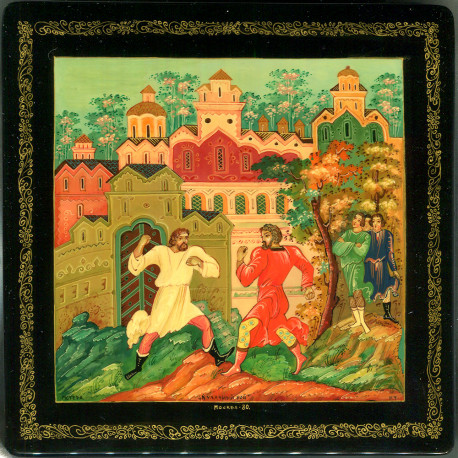 Here we can see a historical scene of two Russian guys having a fist fight or what common known as boxing.

The Slavs were known throughout Europe as valiant warriors. Since wars in Russia were a frequent occurrence, every man should have military skills. Starting from an early age, children gradually learned to stand up for their Motherland, family, and themselves through various games such as "king of the mountain", "on an ice hill", and wrestling and throwing. When children became adults, games developed into real fights, known as"fistfights".
The first mention of such fights was made by the chronicler Nestor in 1048.
The rules and forms of Fist fights were following:
Fist fights were usually held on holidays from Christmas to Trinity, in places until Petrov''s day, and the rampant fighting began during Shrovetide/pan-cake week. According to the number of participants, they were divided into: "street to street", "village to village", "Sloboda to Sloboda". In summer, the battle took place on squares, in winter-on frozen rivers and lakes. The common people and merchants were participated in the battles.
"One-on-one" was the most revered type of combat. It was like old bare-handed Boxing in England. But the Russian type of combat was more lenient, as there was a rule prohibiting hitting a prone person, whereas in England it was introduced only in 1743.
The box is painted in Mstera by Kotov Timofey in 1980.
The box is made out of paper-mache, and covered with black lacquer.The interior is painted red.
The box is hinged at the top of the composition, and rests flat. The work is signed with the initials of the artist's name, Mstera and 1980.
The box is in perfect shape, was not used, kept in the original carton box.