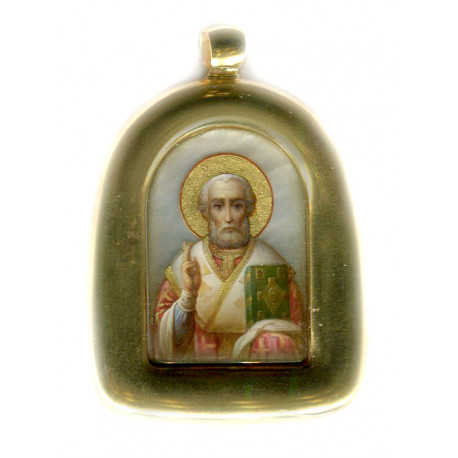 Venerable Sergius of Radonezh (or Sergey Radonezhsky, or Serge of Radonezh), was a spiritual leader and monastic reformer of medieval Russia. Together with Venerable Seraphim of Sarov, he is one of the Russian Orthodox Church's most highly venerated saints.
When the Principality of Rostov fell into the hands of the Prince Ivan Danilovich of Grand Duchy of Moscow, his parents Kirill and Maria became impoverished and moved to Radonezh together with their three sons: Stefan, Bartholomew and Peter.
Upon his parents' death, Bartholomew went to Khotkovo near Moscow, where his older brother Stefan was a monk. He persuaded Stefan to find a more secluded place to live the ascetic life. In the deep forest at Makovets hill they decided to build a small cell and a church dedicated in honor of the Trinity. Thus started the history of the great Trinity-St. Sergius Lavra.
In time, Stefan moved to a monastery in Moscow. Varfolomei took monastic vows, taking the name Sergius, and spent more than a year in the forest alone as a hermit. Soon, however, other monks started coming to him and building their own cells. After some time, they persuaded him to become their hegumen, or father superior, and he was ordained to the priesthood. Following his example, all the monks had to live by their own labor. Over time, more and more monks and donations came to this place. Nearby, there appeared a posad, which grew into the town of Sergiev Posad, and other villages.
When the news of Sergius's accomplishments reached patriarch Philotheus of Constantinople, he sent to him a monastic charter. During the reign of St. Dmitri Donskoi, his disciples started to spread his teaching across central and northern Russia. They settled intentionally in the most impracticable places and founded numerous monasteries, of which Borisoglebsky, Ferapontov, Kirillo-Belozersky and Vysotsky monasteries could be mentioned. St Sergius was also connected with the foundation of two monastic communities in Moscow - Andronikov and Simonov monasteries. All in all, disciples of Sergius founded about 40 monasteries, thus greatly extending the geographical extent of his influence and authority. However, when Metropolitan Alexius asked him to become his successor, Sergius declined, preferring to remain a simple monk. Sergius died on September 25, 1392, and was glorified (canonized) in 1452. Among the many affectionate titles given him, he has been referred to as the "Abbot of Russia" and "valiant voevod" of the Russian land.
The Roman Catholic Church officially recognizes Sergius as a saint, listing him in the Martyrologium Romanum. He is honoured in the Calendar of Saints of several churches of the Anglican Communion.
The pendant was made and decorated in Workshops of husband of Lubov, Yuriy Chernobaevskiy. In icon were use followed materials as bronze covered with gold, gold itsels, mother-of pearl.